You are here: Home / Archives for Washing Machine

Hazard: An unbalanced load can cause the washing machine to shake excessively and the drum to come loose during use, posing a risk of injury to consumers and property damage to the surrounding area.

Incidents/Injuries: LG has received at least 343 reports of washing machines vibrating excessively, of which at least 187 involved minor property damage. One minor injury has been reported. 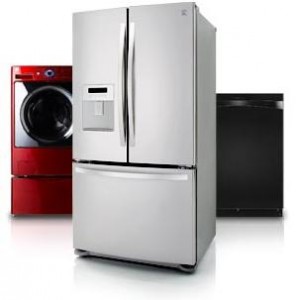 Frigidaire offers eco-friendly washers that use up to 82% less energy and 60% less water than washers from just ten years ago. Plus, the Energy Saver Option further reduces energy use up to 60%.

Many Frigidaire washers have been recognized by the Environmental Protection Agency (EPA) as three of the most efficient ENERGY STAR washers on the market. Look for the certification on most of the Affinity models. 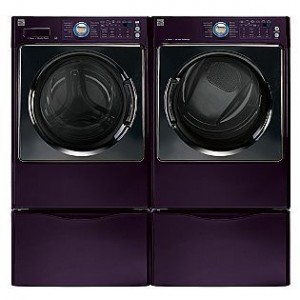 The Kenmore Elite® 4.3 cubic foot Front Load HE Steam Washer and the matching Kenmore Elite 7.4 cubic foot Steam Dryer bring technology and convenience to the laundry room. Additionally, the washer has been awarded the ENERGY STAR® Most Efficient designation in 2011.

In only 20 minutes, the Steam Refresh technology (dryer models only) gently refreshes clothes by relaxing wrinkles eliminating the need for ironing or re-washing

Features Kenmore Connect, a functionality that sends customers’ real-time diagnostic information directly from the washer or dryer over the phone to highly-trained service experts who answer questions, suggest solutions, or provide instructions to help keep the appliance running properly

The washer and electric dryer in white are $1,199 per unit and $1,299 in color finishes. Gas dryers are slightly more expensive.

It seems that every appliance in the stores these days has qualified for the Energy Star label. A look around the local appliance store is dotted with the ubiquitous bright yellow tags.

Energy Star, in an effort to improve the system – everything can’t be the BEST – has added a “Most Efficient” designation to their listings.

“This new designation will help Americans save money and cut pollution by quickly pointing them to the best Energy Star products have to offer. Highlighting Energy Star’s Most Efficient products is a great way to encourage the strides in innovation that bring even more energy and money saving choices to our stores,” said EPA Administrator Lisa P. Jackson. “We know American consumers are eager to make purchases that save them money on their utility bills and reduce the pollution in the air we breathe, and these labels will help them identify the best ways to find those purchases.”

Products that receive the Most Efficient designation demonstrate exceptional and cutting-edge efficiency performance. The Most Efficient recognition will represent approximately the top five percent of models on the market in the following categories: clothes washers, heating and cooling equipment, televisions, and refrigerator-freezers. The following Energy Star partners’ products are among the first to be recognized as Most Efficient: Electrolux Major Appliances, Sears’ Kenmore, LG, Samsung, Best Buy’s Insignia Brand, Panasonic, Nordyne, and Rheem. Later this year, EPA will initiate a process to consider additional product categories for potential inclusion in 2012.

Consumers will be able to identify Most Efficient products on the Energy Star website and in stores by looking for the Most Efficient designation. In addition to meeting established performance requirements, products must also be Energy Star qualified and certified by an EPA-recognized certification body. Manufacturers are encouraged to submit products that meet the requirements to EPA for recognition.

If you have been following the ongoing series of court debates between LG and Whirlpool, you’ll be aware of the back and forth battles regarding steam dryers and refrigerator patents.

The United States District Court in Chicago this week entered a final judgment in favor of Whirlpool in a case filed by LG Electronics involving Whirlpool’s steam dryer advertising. The court had previously ruled that “Whirlpool has established that its dryers do, in fact, use steam,” and that “LG did not introduce expert testimony or credible evidence of even a single Whirlpool customer, retailer, or trade representative who expressed confusion.”

While this seems to settle the steam dryer case, the refrigerator patent battles continue. LG originally sued to have Whirlpool fridge patents invalidated; Whirlpool countersued. In March 2010, a jury trial found mostly in favor of Whirlpool and awarded Whirlpool $1,786,925. On July 1, 2011, the court granted a new trial and set a trial date of Sept. 28, 2011.

Whirlpool is seeking a judgment that better validates its patent claims; LG seeks to have the claims of patent violation invalidated and eliminate its liability. Stay tuned…

Sanyo Electric Co., Ltd. plans to sell much of its major appliance business to China’s Haier Group, in an uncommon instance of a Japanese electronics conglomerate allowing a rising Chinese rival take over a chunk of a major business segment.

The sale of the Sanyo operations—mostly washing-machine and refrigerator businesses—is part of Panasonic’s efforts to eliminate overlapping areas since its 2009 purchase of Sanyo. For Haier, the acquisition of Sanyo’s businesses will help it move a step closer to becoming a globally recognized quality appliance brand like Whirlpool or Electrolux.

Haier Group will have the rights to use the Sanyo brand name on washing machines, refrigerators, air-conditioners, TVs, and other consumer appliances in Vietnam, Indonesia, the Philippines, and Malaysia under the SANYO brand for a limited, but unspecified, period of time.

The acquisition of the Sanyo businesses is “an important part of Haier’s overall growth strategy,” said Haier Vice President Du Jingguo in a statement released Thursday.

According to the Wall Street Journal, Haier has said previously it was looking at overseas acquisitions to grow. President Yang Mianmian told Dow Jones Newswires in March it would look at opportunities that arise.

The Chinese firm previously held talks with General Electric Co. in 2008 to buy the U.S. firm’s appliance unit. Before the talks with GE, Haier made an unsuccessful bid for Maytag Corp. in 2004 but lost out to Whirlpool Corp.

Haier holds more than 6% of the world’s white-goods market.

We can all use a little help these days. If your budget cuts have you rethinking how to replace an aging appliance, GE offers a solution that lets you buy a new appliance while helping others. At the online GE outlet store, with any purchase of one of their discontinued, closeout or overstock appliances (which includes standard GE warranty and free delivery) they will donate 2% of the price to the United Way.

They have just about every appliance you could need – from refrigerators, and washers to trash compactors and range hoods. The supply and variety varies, with more choices in the larger kitchen appliances than others. The savings also vary. At last look, you could save $200 -$500 on a refrigerator, but just around $20 on a ventilation hood.

It would also be a good resource if you are trying to match older GE Appliances already in your kitchen.

It might not have been the most stylish, but for decades the top-loading laundry machine was the most affordable and dependable. Now it’s ruined—and Americans have politics to thank.

The above is quote from a Wall Street Journal Opinion piece by Sam Kazman. He goes on to say:

In 1996, top-loaders were pretty much the only type of washer around, and they were uniformly high quality. When Consumer Reports tested 18 models, 13 were “excellent” and five were “very good.” By 2007, though, not one was excellent and seven out of 21 were “fair” or “poor.” This month came the death knell: Consumer Reports simply dismissed all conventional top-loaders as “often mediocre or worse.”

How’s that for progress?

The culprit is the federal government’s obsession with energy efficiency. Efficiency standards for washing machines aren’t as well-known as those for light bulbs, which will effectively prohibit 100-watt incandescent bulbs next year. Nor are they the butt of jokes as low-flow toilets are. But in their quiet destruction of a highly affordable, perfectly satisfactory appliance, washer standards demonstrate the harmfulness of the ever-growing body of efficiency mandates.

The federal government first issued energy standards for washers in the early 1990s. When the Department of Energy ratcheted them up a decade later, it was the beginning of the end for top-loaders. Their costlier and harder-to-use rivals—front-loading washing machines—were poised to dominate.

When the Department of Energy began raising the standard, it promised that “consumers will have the same range of clothes washers as they have today,” and cleaning ability wouldn’t be changed. That’s not how it turned out.

In 2007, after the more stringent rules had kicked in, Consumer Reports noted that some top-loaders were leaving its test swatches “nearly as dirty as they were before washing.” “For the first time in years,” CR said, “we can’t call any washer a Best Buy.” Contrast that with the magazine’s 1996 report that, “given warm enough water and a good detergent, any washing machine will get clothes clean.” Those were the good old days.

The situation got so bad that the Competitive Enterprise Institute started a YouTube protest campaign, “Send Your Underwear to the Undersecretary.” With the click of a mouse, you could email your choice of virtual bloomers, boxers or Underoos to the Department of Energy. Several hundred Americans did so, but it wasn’t enough to stop Congress from mandating even stronger standards a few months later.

Now Congress is at it once again. On March 10, the Senate Energy Committee held hearings on a bill to make efficiency standards even more stringent. The bill claims to implement “national consensus appliance agreements,” but those in this consensus are the usual suspects: politicians pushing feel-good generalities, bureaucrats seeking expanded powers, environmentalists with little regard for American pocketbooks, and industries that stand to profit from a de facto ban on low-priced appliances. And there are green tax goodies for manufacturing high-efficiency models—the kind that already give so many tax credits to Whirlpool, for example, that the company will avoid paying taxes on its $619 million profit in 2010.

If you have switched from a top loading to a front loading washer and have a definite opinion about which is better – and why – please add your comment below. Let your voice be heard – are the socks you’re standing in clean enough?

Just in time for Mother’s Day- a photo I found recently that I liked for its quaint look back in time. This woman seems so pleased with her new washer and dryer. I imagine that the family had saved for a while to acquire the set and ease her workload. Her daughter writes that it is probably 1953 and this is the family’s first automatic washer and dryer. “Before that she used a wringer washer and we either hung the clothes in the basement, or outside if the weather was good.”