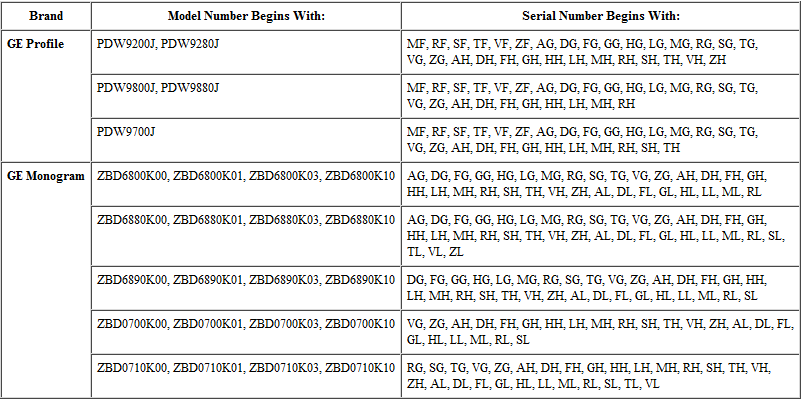 Hazard: Liquids can pool under the control knob and cause the surface heating element to turn on unexpectedly, heat to temperatures other than expected and then not turn off, posing a risk of fire and burn hazards to consumers.

Incidents/Injuries: Electrolux has received 70 reports of incidents, including three reports of fires that resulted in property damage. Three minor burn injuries were reported.

Description: This recall involves Frigidaire and Electrolux ICON smoothtop electric cooktops and Frigidaire slide-in ranges with rotary knobs and digital displays. Model and serial numbers for the slide-in ranges can be found inside the oven door on the left side of the unit or on the underside surface on cooktop models. The following model and serial numbers are included in this recall:

Remedy: Consumers should immediately stop using and unplug the recalled ranges or power off cooktops at the circuit breaker. Contact Electrolux for information on how to obtain a free repair kit.

Consumer Contact: For additional information, contact Electrolux at (888) 281-5310 between 8 a.m. and 10 p.m. ET Monday through Saturday or visit the firm’s website at www.smoothtoprangerecall.com (Frigidaire) or www.cooktoprecall.com (Electrolux).

We’ve said it before, here, but we’ll say it again, below we list some approximate lifespans for household appliances.

Household appliances are generally so reliable, having one break down takes us by surprise. The hassle of shopping for a new appliance is trouble enough without worrying about paying for it too. Plan ahead, because the dryer is not going to sound out announcements before it conks-out.

The first decision to be made is if you really need a new appliance, or if repairs are in order. If the repair costs half the price of a new appliance, seriously consider buying new, says Mark Kotkin at Consumer Reports. According to the magazine’s research, any major household appliance more than eight years old should be considered for replacement rather than repair. The magazine also suggest you skip the repair and buy new if your appliance costs less than $150.

“I’ve seen a lot of people’s budgets over the years, and it seems like household maintenance is one category that people miss,” says Matt Bell of MattAboutMoney.com. People who know the age of their appliances and their expected life spans can budget better for replacements. Or they could maintain a more general emergency fund for when bad things happen. Either cash stash will help you avoid finance charges on a credit card you can’t pay off right away, said Bell.

A home warranty is a service contract for an existing home that covers major operating systems, such as a furnace or a dishwasher. The homeowner buys a repair contract, often for $300 to $500 a year, and pays a service charge for each call. If many of your major appliances are near the ends of their useful lives, a home warranty might be worthwhile. But warranties are complicated, covering some types of breakdowns and not others. Pre-existing conditions and malfunctions that stem from poor maintenance or installation can be excluded. Some companies will cover all or part of an appliance’s replacement cost. Choose this option carefully.

Hazard: The switch on the cordless drill can overheat, posing a fire and burn hazard to consumers.

Incidents/Injuries: Ryobi has received 47 reports of the drills overheating, smoking, melting or catching fire, including 12 reports of property damage to homes or vehicles. Two of the incidents involved minor burns from touching an overheated switch.

Description: The Ryobi Model HP 1802M cordless drill is powered by an 18 volt rechargeable NiCad battery. The drills are blue and black in color with “Ryobi” appearing in red and white on the left side. The model number can be found on a white label on the right side of the drill.

When you’re shopping for a new appliance, you want a store that will provide good prices, helpful staff and ease of service along with a good selection.

Unfortunately, two surveys from the Consumer Reports National Research Center show that no one retailer seems able to provide it all.

CR did find some cause for hope. Abt Electronics, in the Chicago area, and independent local stores garnered high praise from shoppers who bought a major appliance in the past year. For small appliances, independents also rated highly, along with Costco, though the standout was Amazon.com, as in past years.

CR’s rankings for shopper satisfaction came from more than 21,000 respondents to its 2009 Appliance Shopper Satisfaction Survey. It also commissioned a separate, nationally representative Home Gripes survey of 1,405 homeowners about their experiences shopping at home stores.

Only Abt Electronics scored better than average on price for major appliances. For small appliances, Amazon.com and Costco got readers’ highest marks for price for the second year in a row.

Here’s more from the Pittsburgh Post-Gazette and Consumer Reports:

Besides price, the expertise and manner of a store’s sales staff were key reasons for choosing a major appliance retailer, according to the CR Shopper Satisfaction Survey. But respondents to the Home Gripes survey cited difficulty in finding a useful salesperson at all as one of their chief shopping annoyances. Salespeople who were arrogant or even nasty were especially bothersome for women.

Independent retailers, Abt Electronics and Pacific Sales in California received top marks for having salespeople knowledgeable in major appliances. The trio also stood out for service rendered; Best Buy scored below average for its staff. For staff expertise and service in small appliances, independent local retailers scored best. Among major retailers, only Lowe’s stood out; and for service, Sears scored above average.

Around a quarter of major- and small-appliance shoppers chose retailers based on their reputation for high-quality products. Retailers varied significantly on both counts. Poor selection was a complaint for less than 5 percent of respondents to CR’s Shopper Satisfaction survey. But almost a quarter of small-appliance shoppers at Sam’s Club complained that the store had too few brands or models available for selection. For major appliances, no store scored better than average for shopping ease.

For major-appliance product quality and selection, Abt Electronics and Pacific Sales scored best; for selection, Home Depot scored below average. For small-appliance purchasing, Amazon.com and independents stood out for quality and selection. Shopping for small appliances in stores was more varied, with independent retailers getting top marks for shopping ease, followed by Sears, Lowe’s and Best Buy, which all scored above average.

Stores that push extended warranties were among the top annoyances in CR’s Home Gripes survey. In the Shopper Satisfaction Survey, respondents who bought a major appliance were much more likely than those buying small appliances to be hit with an extended-warranty offer.

For small appliances, Amazon.com’s storage of shipping addresses and payment preferences might have contributed to its high score for checkout ease in the Shopper Satisfaction Survey. Independent retailers also received top marks, followed by Costco. For major appliances, no retailer scored worse than average. But Abt Electronics and independents fared best.

LG has taken the technology they used in the Kenmore Connect system for Sears. and applied the self-diagnosis technology for clothes washers and dryers to their own LG brand.

Consumers calling the LG customer service center are instructed to press select buttons on the laundry unit, which in turn trigger a series of diagnostic tones. Each tone corresponds with a specific potential maintenance need and can be identified by trained service technicians over the phone, allowing them to evaluate the information and provide feedback based on the data that was received. The system is designed to eliminate a step in the troubleshooting process, because issues may be identifiable without a service technician visit. When service visit is required, the technician can come prepared with the correct parts so that the repair can be resolved in one visit.

Units: About 160,000 (these lawnmowers were previously recalled in September 2002 for a fire hazard, and that recall was expanded in August 2006)

Hazard: The lawnmower’s motor and blade can unexpectedly turn on after the mower’s safety key is removed, posing a laceration hazard to consumers. Removing the safety key is designed to keep this from occurring.

Incidents/Injuries: Black & Decker has received 34 reports of the motor operating after removal of the safety key, including two incidents that resulted in finger lacerations, one requiring stitches.

Remedy: Consumers should stop using the recalled lawnmowers immediately and call Black & Decker or Sears for a free inspection and repair, or a credit towards a new cordless lawnmower. Consumers who had their mowers repaired as a result of the previous recalls should also have their mowers inspected and repaired as part of this recall.