You are here: Home / Archives for Refrigerators and Freezers

Consumer Reports tells us “the nameplate doesn’t always indicate who makes your fridge, oven, or washer”.

Our recent tests of refrigerators included more than 70 models from 20 brands.

That’s a lot of companies, until you play appliance detective and discover that the $20 billion annual market for refrigerators, ovens, washers, and other major home appliances isn’t such a vast place after all. That activity turns out to be a bit like playing Six Degrees of Kevin Bacon, though instead of the well-connected actor popping up repeatedly, a few mammoth manufacturers and brands do.

Got pen and paper ready? We haven’t covered every manufacturer, but this rundown will give you a good idea about who actually makes all those appliances. It’s also worth noting that the manufacturing arrangements change all the time.

The Whirlpool Corporation, based in Benton Harbor, Mich., makes Whirlpool, KitchenAid, and Gladiator products. The company accounts for about 17 percent of major appliance sales in the U.S., following closely behind the General Electric brand (17.8 percent) and the Sears Kenmore brand (22.2 percent). Over the years, the Whirlpool company has gobbled up Admiral, Amana, Jenn-Air, Magic Chef, and Maytag, and makes appliances for Ikea (ovens, ranges, cooktops, microwaves, refrigerators, freezers, and dishwashers) and Kenmore (some of the brand’s refrigerators, dishwashers, washers, and dryers). Gladiator and KitchenAid are two “Whirlpool bred” brands.

General Electric is well known for a vast array of products–lightbulbs, jet engines for military planes, and “The Today Show.” But this corporate colossus, based in Fairfield, Conn., also makes appliances under the GE, GE Monogram, GE Profile, and Hotpoint brands.

Across the Atlantic, BSH Home Appliances is a leading purveyor of high-end appliances. This German company brings you upscale kitchen and laundry appliances under the brand names Bosch, Gaggenau, Siemens, and Thermador.

Elsewhere in Europe, you might think of Electrolux as the onetime producer of those old, quirky-looking canister vacuums. But this Swedish manufacturer has also brought you refrigerators, freezers, washers, and more under its own nameplate and brands like Frigidaire, Gibson, Kelvinator, Tappan, and White Westinghouse. Proving the Kevin Bacon theory, Electrolux is also connected to Sears: It makes Kenmore dishwashers and high-end Kenmore Pro appliances.

Viking sounds Scandinavian, too, but the company, known for its pro-style ranges and built-in refrigerators, is actually based in Greenwood, Miss. It’s a small world after all: Sweden’s Asko company currently makes some of Viking’s dishwashers. Viking does manufacture its other appliances (and by the end of 2007 will make its own dishwashers), except for a freestanding refrigerator that’s made by Amana and undercounter fridges from Marvel. Got all that?

Ah those were the days. Mom in the kitchen cooking dinner (chops, potatos, peas) while we all played tag outside for hours until she finally called as the sun came down “Dinner” and we slowly worked our way back home for a family dinner. But what happens if the boys are at little league, the girls are at karate, dad’s stuck on the freeway, and mom is on the way to pick everybody up as she swings home from court? Well if you want to justify having those two incomes check out this super hot (or super cold) integrated refrigerated double wall oven with internet controls. Just buy a premade meal from one of those almost home cooked shops and toss it in the oven before you leave in the morning. Afraid of salmonella? no problem. These ovens have built in refrigeration. Program it to stay cold all day. When you walk out of court, you can pull up the browser on your blackberry, hit the oven over the wireless net and tell it to start cooking.

Pick up the kids, meet dad on the driveway, and dinner is waiting as you walk in. The Jetsons never had it so good.

TMIO announced an expanded Intelligent Oven product line based on the original Connect Io double wall oven of consistent accolades. The original Connect Io double offers remote control by Internet and telephone, and comes with built-in refrigeration to keep foods fresh before and after cooking. These advanced remote features allow homeowners to communicate with the oven to give cooking, warming, and refrigeration instructions so that “dinner is ready when you are.”

Here’s a link to TMIO: to read more

Whirlpool Corp. is launching a nationwide search for someone to portray the Maytag Repairman — the lonely, iconic character that has represented Maytag for 40 years.

The Repairman has been under new ownership since Whirlpool purchased the Newton-based Maytag in March and announced that all Maytag’s Newton operations would close by the end of 2007.
The new Repairman could be a professional actor, an ordinary guy next door or even a real-life appliance repairman, Whirlpool officials said.

When there were three major TV networks, appliances were fewer and simpler. WJAC-TV has an article Kitchen Appliance Features You Need and Don’t Need which helps you to decide which features should you pay for, and which ones should you forget?

For electric ranges, smooth glass surfaces are better because the coils on older style ranges are so difficult to clean.

For gas ranges, it’s worth paying a bit more to get a sealed burner and avoid those with a gap around the burner where spills of liquids and crumbs could easily drip below the surface

Upgrading to a self cleaning oven for an extra fifty dollars is definitely worth the money to avoid the task of cleaning it up yourself.

On the other hand, not all bells and whistles are necessary. A warming drawer might add as much as $150 to the price of the range and it’s a job done easily as well in your microwave oven.

“The least expensive refrigerators have old fashioned wire shelves. That means that spills can drip down. We think it is worth paying a little bit more and getting glass shelves that have rims all the way around the edge to contain the spills. It’ll make your life much easier in the long run.”

Good Housekeeping says: don’t even consider a refrigerator without an “automatic defrost” feature. For more tips on finding the right appliance for your family, check out the August issue of Good Housekeeping or visit www.goodhousekeeping.com.

It’s July and maybe you haven’t yet emptied the Independence Day charcoal ash from the bottom of your Weber kettle grill. You’d like to figure out a way to heat up your house by boiling corn on the cob or macaroni or potatos to make salads to go along with the remaining summer barbeques you’re planning.

According to the Charlotte Observer:

The outdoor kitchen trend caught on with average consumers in the past two or three years, according to local builders, designers and landscapers.

Architects nationwide have reported a surge in the last year of customers requesting outdoor living space such as decks, patios and outdoor kitchens, according to a 2006 American Institute of Architects survey.

“The outdoor room is sort of the family room of the 21st century,” 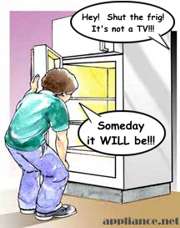 Hey, I didn’t put those words together in the first sentence of this Orlando Sentinel article entitled

Refrigerators may lack the sex appeal of other swanky kitchen appliances, but that image is changing.

Dacor and Sub-Zero use microchips to adjust defrost cycles to usage patterns. Bosch refrigerators have sensors in less pricy models. Usage patterns?!? Like when kids stand in front of the frig for half the afternoon?

Parents used to scream at kids to close the refrigerator door and to remind them that the frig isn’t a TV. Not for much longer as these features trickle down in the coming years.