You are here: Home / Archives for Office 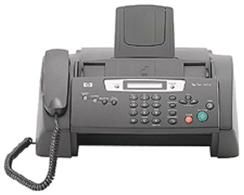 Hazard: The fax machines can overheat due to an internal electrical component failure, posing fire and burn hazards.

Description: This recall involves HP Fax 1040 and 1050 models. The HP logo and the model number are printed on the front of the fax machine. The fax machines are dark gray and measure about 11 inches high x 14 1/2 inches wide.

Sold at: Electronics, computer and camera stores nationwide, and online at www.shopping.hp.com and other websites from November 2004 through December 2011 for between $90 and $120. Some of the recalled fax machines were replacement units for a previous recall involving HP fax model 1010 in June 2008.

Remedy: Consumers should immediately stop using the recalled fax machines, disconnect them from the electrical outlet and contact HP for a rebate on the purchase of an authorized replacement HP fax machine or a partial rebate of certain HP ink jet printers.

Hazard: Improper grounding of the case and inadequate insulation for the circuit breaker poses an electrical shock hazard to consumers.
Incidents/Injuries: None reported

Description: This recall involves all Sanus Elements model ELM205 low-profile power conditioners or surge protectors. SANUS ELEMENTS is printed on the front of the unit and the model number is printed near the UL logo on the back.

Sold by: Independent home theater dealers from June 2009 through December 2010 for about $90.
Manufactured in: China
Remedy: Consumers should immediately stop using the product and contact Milestone for a replacement product or refund.

Consumer Contact: For additional information, contact Milestone toll-free at (877) 894-6280 between 8 a.m. and 9 p.m. CT Monday through Friday and between 10:30 a.m. and 7 p.m. CT Saturday and Sunday, or visit the firm’s website at www.milestone.com/recall

My computer stays on through the week, only getting shut off on the weekend.  My answering machine and TV stay plugged in, their little red lights glowing in the night.  I do turn off the treadmill between uses and the DVD player too.

My energy habits are probably similar to many Americans.  If you’re wondering how much energy you’re wasting, or conversely, saving by turning appliances off, check out this energy calculator from GE:

Some appliances are marked with a blue star indicating that an  EnergyStar model is available or click on the green star to see how much energy (and money) you’ll save with a new appliance. 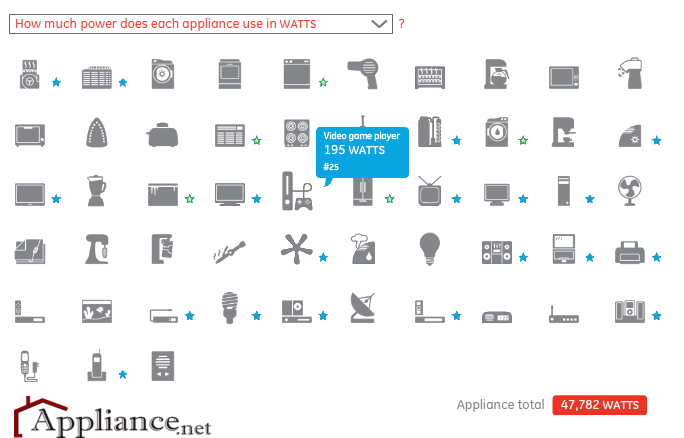 In the not too distant past, it was the stuff of science fiction for people to have “smart” homes – those houses that lit up and co-ordinated timers, alarms, coffeemaker and dinner each day as you awoke in the morning and arrived home at night.

Today a study by Connected Home Research Council (formerly the Internet Home Alliance), the research arm of the Continental Automated Buildings Association (CABA), shows that the number of Web-connected households in the United States that consider the idea of a connected home “definitely appealing” has held steady since 2005.

One important finding of the study is that consumers would like their appliances to be part of this web-based system. Consumers are less interested in “automated” homes than having the appliances and electronic devices within their residences communicate and interact with one another.
“What consumers want most is an easy, seamless way to integrate their smart-home devices, their mobile device, their TV, their appliances, you name it,” said Whirlpool senior manager Carol Priefert.

Some findings from the study show that while many households have high speed internet access, not everyone is prepared to have their household appliances communicatiing yet.

“Made in China”  I search for this phrase daily now as I shop for my family.  When my son was only three, he would search for it on his toys and we would all joke about how everything we owned was made in China.  Now I’m trying to avoid these imported products.  I, like so many Americans have become leery of China’s goods.  Tainted milk and fish have marked all Chinese products and so even high quality  small electronics are being avoided.  Tim Somheil of Appliance Magazine writes more:

The appliance industry sources huge numbers of small electrics, consumer electronics, and even white goods out of China. The vast majority are high-quality appliances, well made, certified to international safety standards, and—because they’re made in China—they offer a cost advantage that enables the consumer to get a better product for the price.

Of course,it is a vast overgeneralization by the public to associate well-made appliances with tainted milk, but that association is reality.

China—for the good of all the enterprises that manufacture consumer goods within its borders—desperately needs to take a more honest approach. When there’s a crisis involving Chinese-made products, of any kind, the country needs to embrace that problem immediately and publicly.

Consider how pleasantly surprised consumers would be if they saw China demonstrate willingness to take ownership of a crisis, without hesitation, and provide full disclosure on the problem’s cause and scope.

And consider what the impact would be if offshore consumers saw this approach consistently. The credibility of the government as a spokesperson for the “Made in China” brand would grow—and China would get real credit from the public for its considerable product safety efforts.

Maybe the best possible scenario in the next few years is to move many consumers’ perception from negative to neutral. That’s still a huge step in the right direction for all manufacturers with “Made in China” stamped on their products.

At this point I really have very little confidence in the integrity of Chinese manufacturers.  I’m no longer incredulous when I hear of a problem product out of China – instead I sigh and hope for the safety of those effected.

So many wonderful new gadgets.  So many user handbooks to read.

Some 48% of technology users usually need help from others to set up new devices or to show them how they function.  “Struggles with modern gadgetry mean less engagement with the services they enable,” said John B. Horrigan, Associate Director of the Pew Internet Project. “Time spent dealing with set-up or outages means less time using modern communication services to connect with friends or find information that might help people be more productive.”

Although tech users can usually fix the problems by themselves, with the help of friends, or by calling upon user support, some say they cannot fix tech problems at all. Here are some of the ways device owners fixed their broken technology:

“In an age in which new technologies are introduced almost daily, a new gadget or service can become popular well before the technology itself is understood by the average user,” said Sydney Jones, Research Assistant at the Pew Internet & American Life Project. “Naturally, some users catch on to new technology more quickly than others, and those who have more trouble grasping the technology are left confused, discouraged, and reliant on help from others when their technology fails.”

South Korea’s LG Display will pay the largest fine, 400 million dollars, the second-highest criminal fine ever imposed by the Justice Department’s Antitrust Division, the department said in a statement.

The Justice Department said the three companies had agreed to plead guilty for their roles in conspiracies to fix prices of liquid crystal display (LCD) panels used in computer monitors and notebooks, televisions, mobile phones and other electronic devices.

The price-fixing conspiracies had a direct impact on computer, television and cellular telephone manufacturers such as Apple, Dell and Motorola, the department noted.

On a recent Sat- urday night while my hus- band and I sat watch- ing a movie, my home was invaded by two men looking for a quick steal. I surprised them in action and they ran off empty handed. The first thing I did as they ran away was grab the landline phone we keep in our home office and call 911. I was able to get help in under 30 seconds. My other phone was left lying around the house and it would have easily been a few minutes to find it. The police were able to respond and catch the men that night.

According to a recent Nielsen Company survey, more than 17 percent, or 20 million, of all U.S. households lack landline phones and use only a cellphone. The research suggested that 20 percent of U.S. households could be wireless-only by the end of the year, the company said.

• smaller households with just one or two residents are more likely to cut the cord than larger households;

• moving or changing jobs contributes to the decision to drop landline service. Thirty-one percent of cord cutters moved before they dropped landline service, and 22 percent changed jobs; and

• although cord cutters tend to use their mobile phones more than landline households, they still save an average $33 per month in a household with only one subscriber, minus $6.69 for each additional wireless subscriber in the household.

Turning exclusively to wireless isn’t for everyone, however. Ten percent of landline customers have experimented with cellular-only communications in their household but returned to landline service, Nielsen said. The primary reason is the need to use a landline for such services as security systems, satellite TV, pay-per-view, fax machines and the like.

We have always felt that a landline was an investment in safety. Keeping the phone near the kitchen in case of a safety emergency was part of our plan, we never thought we would be using it to catch criminals, but being prepared was what the landline was all about.

Hazard: Irregularly positioned wires near the computer’s hinge and/or a dislodged screw inside the hinge can cause a short circuit and overheating. This poses a burn hazard to consumers.

Incidents/Injuries: Sony has received 15 reports of overheating, including one consumer who suffered a minor burn.

Description: The recalled notebook computer models are the VAIO VGN-TZ100 series, VGN-TZ200 series, VGN-TZ300 series and VGN-TZ2000 series. The computers’ screen size is about 11.1” measured diagonally. Not all units are affected; consumers should contact Sony to determine if their unit is included in the recall.

Sold by: The SonyStyle stores and Web site, authorized electronics retailers, and authorized business-to-business dealers nationwide from July 2007 through August 2008 for between $1,700 and $4,000.

Manufactured in: Japan and United States

Remedy: Consumers should stop using the recalled notebook computers immediately and contact Sony to determine if their notebook is affected. The firm will arrange for an inspection and repair, if needed.

Once you’ve picked out the perfect new DVD player or television, you need to plan for the disposal of your old ones.  If your outgoing model was made by LG, that task might just have gotten a bit easier.

“The LG Electronics Recycling Program provides consumers with a free and convenient way of recycling their used, unwanted, obsolete or damaged LG consumer electronic products by dropping them off at a designated Waste Management eCycling Center. Waste Management currently has 160 designated drop-off sites across the United States and plans to have at least one drop-off site in each State by September 2008; the number of sites will continue to be expanded over time.”

“Products covered by the LG Electronics Recycling Program include LG, Zenith and GoldStar brands of televisions, monitors, audio equipment, video cassette players and recorders, DVD players and recorders, combination TV/VCR and TV/DVD units, set top boxes and accessories associated with those products. Consumers may drop off up to 5 LG-branded items at a time. There is no fee to consumers for the covered LG-brand products; other brands will be accepted, but a fee may be charged by Waste Management for non-LG brands.”

You can find out more here: