Hazard: These electric hair dryers are not equipped with an immersion protection plug to prevent electrocution if the hair dryer falls into water. Electric shock protection devices are required by industry standards for all electric hand-held hair dryers. If the hair dryer falls into water during use and is not equipped with this safety device, it can pose a shock and/or an electrocution hazard to consumers.

Description: The recalled hair dryers are made of plastic and are red, blue or green. The hair dryer’s handle folds up. The words “Travel’N Baby” are printed on one side of the hair dryer.

Sold by: Independent beauty supply stores and beauty salons nationwide and online at www.metropolisbeauty.com from January 2004 through January 2005 for about $20.

Remedy: Consumers should stop using these hair dryers immediately and contact Version-X at (800) 871-6824 between 9 a.m. and 5 p.m. PT Monday through Friday or visit the recall Web site at www.metropolisbeauty.com for a replacement hair dryer equipped with an immersion protection plug.

Hazard: Electrical arcing in the fan’s wiring can cause a fire hazard.

Incidents/Injuries: The Holmes Group has received 16 reports of property damage, including one reported injury involving minor burns and smoke inhalation.

Description: The recall involves the Holmes HT30 Oscillating Tower Fan.
The model number can be found on the silver label on the back of the unit. The tower fans are white. “Holmes®” is printed on the front of the base.

Sold at: Target, Bed Bath & Beyond and additional department and specialty stores nationwide from July 2002 through June 2005 for about $30.

Remedy: Consumers should immediately stop using the fans and contact The Holmes Group for instructions on receiving a free replacement unit at (800) 524-9204 anytime or visit the firm’s Web site at www.holmesfanrecall.com.

Well, the skeptics are coming out to challenge the news we reported earlier that microwave ovens may kill germs.

According to the kitchen technology and appliances director of the Good Housekeeping Research Institute Karen Franke:

“We don’t recommend that people do it,” she told The Early Show co-anchor Harry Smith. “They take the risk that their sponge will not be sanitized. It’s a false security.”

Kitchen sponges are the No. 1 source of germs in the house and as many as 80 million Americans contract food-borne illnesses each year — 9,000 of those Americans die.

Critical factors are whether the sponge is wet or dry and the size and power of the microwave oven used. There is also a danger of fire.

In an article entitled Microwave experiments cause sponge disasters there were some strong comments by those who experimented based on the news… omitting the step of wetting the sponge:

“Just wanted you to know that your article on microwaving sponges and scrubbers aroused my interest. However, when I put my sponge/scrubber into the microwave, it caught fire, smoked up the house, ruined my microwave, and p*ssed me off,” one correspondent wrote in an e-mail to Reuters.

“First, the sponge is worthless afterwards so you have to throw it out instead of using it. And second your entire house stinks like a burning tyre for several hours, even with windows/doors open,” complained another.

An inexpensive alternative for frugal shoppers is plain bleach. Add about a teaspoon of bleach to a cup of water, let the sponge sit in the mixture for five minutes, and then germs will be gone.

Good Housekeeping also advises NOT to rely on dishwashers to clean sponges since the water doesn’t get hot enough. 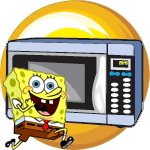