You are here: Home / Archives for cooking in the dishwasher

cooking in the dishwasher

Washing baseball caps in the dishwasher is old news; I’m quite familiar with the idea of sanitizing kitchen sponges there too, and we’ve written here before about cooking lasagna in the dishwasher, but washing your underwear?

Alexia Elejalde-Ruiz of the Chicago Tribune writes of her adventures with her dishwasher:

One recent evening, I ran a variety of non-kitchen items through a dishwasher cycle, including flip-flops, baseball caps, hairbrushes, makeup brushes, dish sponges and, the test of honor, underwear. The computer keyboard was a risk I was unwilling to take.

I also, separately, made dinner in the dishwasher, the goal being a simple meal of poached salmon, steamed asparagus and baked potato. I avoided the dishwasher lasagna Florentine, for which there is a recipe online, and which sounds like a disaster waiting to happen.

The results, although not tragic, were unremarkable.

The baseball caps, two of which I placed on the bottom rack and two on the top, emerged after a normal wash cycle smelling far better than they had going in (thanks to the lemon-scented detergent), with no damage to fabric or shape. Some stains appeared to have faded, but were they immaculate? No. And they were soaking wet.

The plastic flip-flops, long smudged with dirt, still looked filthy when the cycle was over but were undamaged. The plastic hairbrush (hair removed) and an eyeshadow brush caked in Halloween makeup definitely looked cleaner, but not thoroughly. Perhaps the best outcome was for the dish sponges, which went in disgusting and came out looking and smelling almost new.
The two pairs of cotton underwear I draped over the prongs on the top rack had seen better days, poor things. My sopping wet skivvies, which had drooped down through the rack’s cracks like Dali’s melting clocks, were cleaner, but not perfectly, and the fabric looked as if it had been stretched out.

Perhaps the meal would be more triumphant.

Following a recipe for dishwasher salmon from Bob Blumer, author of “The Surreal Gourmet,” I greased the shiny side of a 12-inch square of heavy-duty aluminum foil with olive oil and placed two salmon fillets on top. I drizzled the salmon with freshly squeezed lime juice, added salt and pepper, then wrapped the aluminum foil tightly around the fillets, and wrapped another layer of foil around that. I prepared the asparagus the same way.

I had already run the potatoes through the dishwasher to clean them (a good time-saving trick). I wrapped them in aluminum foil, as well, hoping another cycle would soften them more. With everything on the top rack, I ran a normal cycle, high heat, no soap.

Dinner was meh. The salmon, while cooked, was a little rubbery and not flavorful. The potatoes weren’t cooked nearly enough. The asparagus, however, was steamed perfectly, to a crisp al dente, far better than the mushy spears I often end up with when I throw them in a pot.

Still, the meal was a colossal waste of water. Unless every other appliance in your kitchen has failed, leave your cooking to the stove.

As for underwear, when times are desperate or it’s just too cold outside, I’d rather just hand-wash in Woolite — as my mom used to do.

If you read our post on cooking a turkey in the dishwasher and you tried it, we have a second cooking adventure for you: A Lasagna!

A man named Pete at The Warp and The Weft has the whole project mapped out. We’ll share some of it here for you:

The basic steps are as follows and can be found at wikihow.com:

1.
Cut three 24-inch x 12-inch sheets of aluminum foil and lie flat.
2.
Take first lasagna sheet and place flat it in the center of the aluminum foil.
3.
Spread a thick layer of pasta sauce over the sheet, covering the entire surface.
4.
In a bowl, mix the ricotta cheese and spinach and layer half the mixture on top of the tomato sauce.
5.
Layer desired amount of grated cheese, along with fine herbs, garlic, and onion flakes. 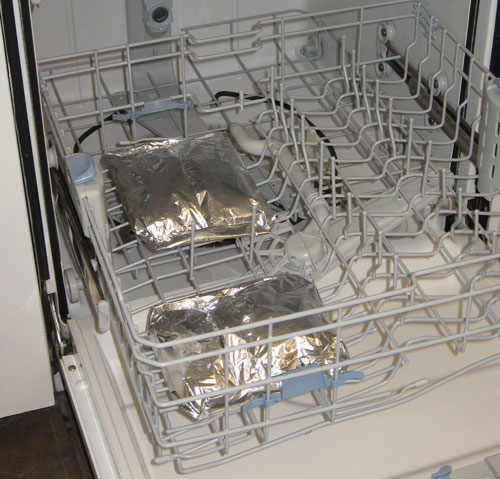 13.Wait for the cycle to complete, then carefully remove lasagna from foil and let stand for a few minutes before serving.

Pete ran into a couple glitches, let us know how yours turns out!

Here’s something to do while the kids are home from school and you have vacation-itis. Entertain the folks with dinner cooked in the dishwasher.

Allow one 50-minute cycle for every 2lb of weight. Hermetically seal a seasoned turkey inside several appropriate turkey-sized oven bags.

Place the turkey in the dishwasher to steam-cook.

When cooking a turkey, ensure that the temperature of the meat doesn’t rise above the recommended 145f by using a meat thermometer.

Two cycles were used, and the bird was finished off in the oven to brown and crisp the skin.

Getting a whole turkey cooked this way might take all day, so