You are here: Home / Kitchen / Shhh ! We’re hunting for a quiet washing machine

The two features that mattered most to me were capacity and quietness. The Kenmore that we were retiring had served us well, so after some comparison shopping, we bought a top loader from Sears that we were told would be quiet. Boy were they wrong! The machine could be heard throughout my house. Sears was very nice about exchanging it for another model. We chose the newest design Sears has called the Oasis. I thought it sounded like a nice compromise between a top and a front loader. Theses are a few of the facts I learned about washers while I waited for the second machine to arrive.

The agitator (that large corkscrew in the center of the tub) is the source of the noise.

Every manufacturer has it’s own definition of noise insulation. There is one manufacturer, Bosch, that measures the noise of it’s machines (and not just it’s washers) in decibels 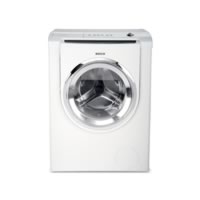 There is really no way of knowing how loud the machine will be until you use it at home. Some stores will plug in a machine and run it for you, but without laundry and your home environment, anything you hear will still be an approximation..

The Oasis technology was only six months old when I ordered my new washer and there was very little information about how well these new agitatorless toploaders worked. There was certainly nothing about their durability. Maytag had tried a toploading agitatorless machine with dismal results. I started getting nervous about my decision; we were about to spend close to $1000 on an appliance we knew nothing about. I spent more time researching quiet washers.

I had heard that Miele made some quiet machines but that they had smaller capacities, were costly and I could not be assured of a low noise level. My Aunt has a newer Fisher-Paykel, which she likes but both local salespeople and the company customer service representative agreed that the spin cycle sounds like a jet airplane taking off. I learned that Bosch makes what is likely the quietest washer on the market. As I noted earlier, they measure the sound level in decibels and all of the Nexxt models ranged from 54dB to 58dB. Some quick research revealed that 30 decibels is equivalent to a soft whisper, 50 to rainfall and 60 to normal conversation. I was convinced.

Sears was wonderful about everything. I had no problem canceling the Oasis order and they even let me postpone the pick up of the noisy Kenmore until the delivery of my new Bosch.

The Bosch washing machine is QUIET! We can stand directly in front of it and barely hear the swoosh and flop of the clothes. Often we don’t even realize it is running until we notice the movement through the window. (Watching the laundry through the window entertained us all for the first few days.) One of my concerns with a front loading machine was that I wouldn’t be able to add an item once the cycle had started. (There always seems to be a stray sock that tries to escape.) This is not a problem at all. There is a pause button that unlocks the door and the cycle continues. (Sometimes it adds a few minutes to the total cycle time.) The washer uses so little water that my visions of flooding were instantly disproved. Not only that but the capacity is unbelievable and the clothes come out very clean.

As with the first machine I purchased, some things only become apparent once the appliance is set up in the laundry room. This Bosch (and I have since learned this is true in other Bosch owning households) is loud during the spin cycle and rocks itself out of place if the machine is very full. The Bosch repairman changed the feet to ones that are meant for soft floors (I have a laminate floor) and that has helped a bit. I was amazed to find that Bosch plans for the differences in floors and will make this change without charge. The other factor that adds to the noise, which I cannot change, is that my laundry room is not on the ground floor. Most problems with noise seem to come from the instability and reverberation of a second floor location.

So far the Bosch is cleaning beautifully and has fit our needs quite well. It was easy to understand all the cycles and how to use them (Although it chooses the water level and that was different.) It uses only about two tablespoons of high efficiency detergent so the cost per bottle of HE detergent and regular detergent is about equal. The cycles run longer than my old machine, but the extremely fast spin cycle removes so much water that drying time is literally cut in half. (I can dry a load of jeans in about 35 minutes.) Overall, I am very pleased with my new Bosch Nexxt washer and plan to purchase the matching dryer when my twenty year old Kenmore wears out.